In 2015, ENCORE's Outreach Program included a special Preview Performance of Mary Poppins at the Warner Grand Theatre for residents of local shelters and disabled children, adults, and their families. These patrons would not normally be able to attend a typical performance and we were thankful to be able to share a special night of enjoying the arts with these special people.

ENCORE has continued throughout the years to engage with the community through Charity Outreach. Recent programs include a partnership with the Los Angeles Police Department to bring students from Title I schools to see live theater. In January and February 2015, ENCORE and the LAPD bussed in almost 2,000 students to our productions at the Warner Grand Theatre and the Redondo Beach Performing Arts Center. Each year we look forward to seeing our friends at the LAPD and the hundreds of smiling faces they bring to our fieldtrip performances.

For the year 2011, ENCORE selected Safety Kids to be our Charity Outreach project. Safety Kids is a thirty minute musical that teaches kids about safety. With a cast of 15 kids, ENCORE is touring this production, free of charge, to various elementary schools around the South Bay. It is an honor to watch our students use their talents to teach these young kids valuable lessons about safety that could save their lives!

Sarah Kovar was a cast member in Chris’s Outreach production and was so inspired him that she approached Summer and asked what she had to do to put on an Outreach production to raise money for Breast Cancer research. Sarah’s mother is a breast cancer survivor and she wanted to create a project that would honor her mother and all women who have battled cancer. After over a year of planning and hard work, ENCORE presented their 2010 Charity Outreach Production of Quilters which was produced by Sarah. Proceeds from the production were donated to the Susan G. Komen Foundation for the Cure. ​ 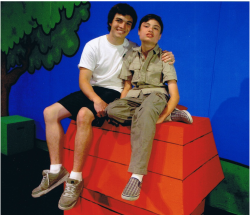 In May of 2008, ENCORE presented our first Charity Outreach production. It was a production of You’re a Good Man, Charlie Brown presented at the Rolling Hills Covenant Church Community Center. The entire project was conceived by ENCORE student, Chris Truman who was only 16 years old at the time. With a teenage cast of many of Chris’s close friends, the production raised over $3,000 for Friends of Angels, an organization that helps families with autistic children.

ENCORE is grateful to Chris for allowing us to partner with him to make a difference in the lives of others. His passion and leadership has already inspired other ENCORE Charity Outreach projects. We know that as the years go on, Chris’s influence and leadership will continue on for generations of ENCORE students to come. ​